Welcome to the breeding of

Welcome to the breeding of

Originally hunting dog in the small games and the birds, Shiba kept(guarded) its instinct hunter(fighter) and its outdoor liveliness. He(it) is a memberof one of the most oldest Japanese races. He was the companion of the Geisha girl and the lovers because it is a symbol of loyalty, respect and love in its native country.
In 1937, he was raised to the rank of ” National Monument of Japan ” to save the race, which was has a moment given onto the point to disappear.
He delights his world by his attitude of cat, his independence and his emotional generosity. He fills all the functions in the family, the cat, the confidant, the guard dog, the dog of game with the children, the sportsman if you wish, performing in activities as the agility. He is tireless.
In Japan, we say of this small exceptional dog 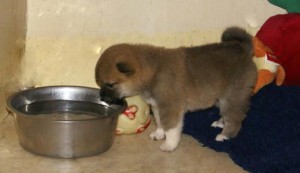 The puppy must be wormed every month until his 6 months. Then, every six months till the end of his life. I recommend the “DRONTAL”, “MILBEMAX” worms effective against all the worms. See in his health record. Vaccination
Any sold or given dog must be necessarily identified (tattoo or electronic transponder) and inoculated (law of January 6th 99). Thus, Your puppy has to have his firstly vaccination when it goes out of the breeding (after 8 weeks). In his three months, you should not forget the reminder of vaccine, in which you can add the rabies and his European Passport, if you plan to cross a border or rise in the east of France. Watch out, the southwest of France in 2004 knew an order of the prefect, further to a case of rabies.

Protection against fleas and ticks 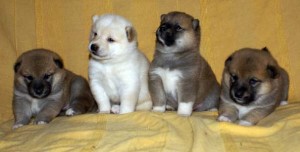 To fight against these pests, I advise you to use pipettes or atomizers which are to be more effective than powders and necklaces. They often have a longer life expectancy and resist the water. Personally, I use “STRONGHOLD”. It is essential to spray them correctly, because the piroplasmose is fatal in the dog. The piroplasmose has a car by the tick. And the flea brings worms.
Until 6 months of your dog, to put off your puppy of the external and internal parasites, he is interesting every month of him trait with the “stronghold” (product attacking every types of parasites).
Attention: certain products are too hardly for sensitive skins and can be some poison for cats.

During the periods of metamorphoses, Shiba can lose almost all of their fur and seem very thin. It is generally rather spectacular and we have any courru at the veterinarian for nothing. During this period, a daily brushing will help in the regrowth of the hair and will shorten the metamorphosis. I advise to give to the minimum 2 baths a year, but not every month either, because it could pull problems of skins (strong smell, irritation). Otherwise Shiba does not require more interview and even we could say that it has a self-cleaning hair. 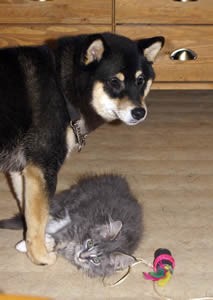 Your puppy needs three meals a day until his 6 months. If before his6 months, you realize that heeats little in noon even not at all, you can cross him in 2 meals a day. Do not forget, the ration indicated to the back of the package is daily and thus you have to divide her according to the number of meals.

From 6 months to one year, you pass in two meals a day.
Aprè his on one year, it’s up to you. If you have the possibility of staying in two meals, it is better for the dog (less sensation of hunger and few avoid the twisting of stomach). But if he is more practical for you to give him a meal a day you can.
Watch out, avoid irritating the dog just before and after the meal. By strong heat, give to eat in the evening late (always for the same problem of twisting).

I advise you to give to your dog a healthy and well-balanced diet adapted to the life of your dog. The growth is essential, thus opt for specific croquettes for puppy (puppy-junior “EUKANUBA” small race, or junior “Purina Proplan” small race).
Prefer croquettes to boxes and have supper, which are generally little balanced. A good food will have strong consequences on the future of your dog. Certain problems due to a bad food : obesity, food dermatosis and other cutaneous problems, osseous problems …
Attention: especially add nothing for the growth if your dog has a good food it could cause osseous problems. If you change food, do not forget to make a transition over a period

My meeting with the Shiba

Fascinated by the Japanese dogs since my youngest age, I discovered one day Shiba Inu thanks to his older brother l’ Akita Inu.

Possessing Akita since 1992, I have in multiple resumption crusader the path of Shiba Inu during the canine exhibitions. Deserving representing Japanese dogs, this small monkey seduced me: the character of a big dog stuck in a small body.
Tachi arrived in the family in June, 2009. Joueuese, charming and facetious, him not he needed not for a long time to be accepted by the other members of the family:Akita and tomcats.
Miss Tachi chose Yuki as substitution mom and Tensho as dad, with whom she still behaves as a puppy.
In his/her turn, she is of use as mom to Shiva, HER cat Maine coon.

Shiba is really of the happiness on a daily basis, one not if boredom never with him. It is a really complete dog: distinguished in company, player with the children, the asset(the active person) outside he knew how to make me appreciate the dogs of small races.